How to Save on Your Mcdonald’s Online Order

Think of the year 1996. India had just opened its doors to the rest of the world. American companies like Domino’s, Pizza Hut, and Coca-Cola were beginning to set up shop here. This was when McDonald’s entered too.

You must remember that in 1996, eating out was not a trend in India. In fact, even in the year 2003, only 3 of the 100 meals people ate in a month were eaten out. This was the market that McDonald’s launched in. Not only was the demand low, but there were also no supply chains for McD to rely on. For instance, there was no lettuce supply chain in India. Everybody everywhere used cabbages in burgers.

So, what did McDonald’s do? It built the chain from scratch. Yes, the giant wished to make profits. But that would come years later. First, it had a market to build. McDonald’s is planning to invest a sum of Rs. 100 crore in the current financial year. It this they are planning to expand the number of outlets. They are going to open 30 new outlets in India. 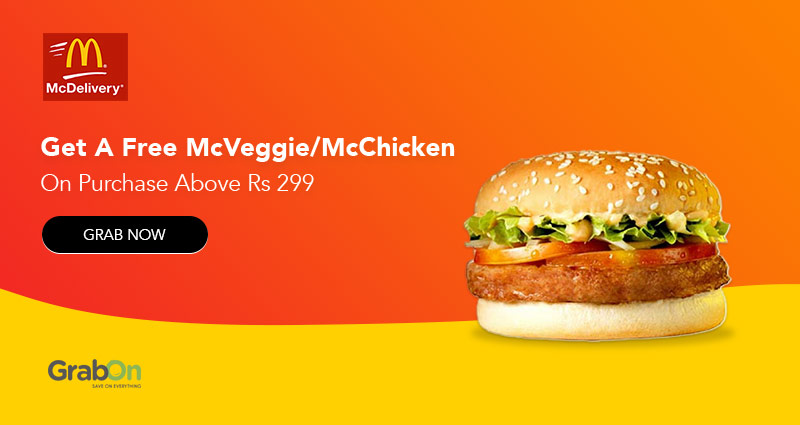 McDonald’s prices were, and continue to be, unmatched. This is the case not just in India, but worldwide. The self-service, the lack of waiters and waitresses, and the quantity-purchase of raw materials make sure that the burger is big and cheap.

But in India’s case, the burgers are especially cheaper. According to the Big Mac Index, our country has the cheapest McDonald’s burger. The Chicken Maharaja Mac costs Rs. 215 at present. Its foreign equivalent, the Big Mac costs $4.11 (about Rs. 300) in Britain.

Another reason why we have it so cheap is that McD introduces innumerable deals here. As apps like Swiggy and Zomato make online ordering popular. McDonald’s aides it with more discounts than before.

Some of the coupons from the Mcdonald’s itself are listed below. We would update the list when we get a new coupon. Do check the list for the latest offering.

In addition to the above, you can also avail yourself of free shipping for your orders. Use the coupon “GOFREE” to get free shipping. You can check out all the coupons for Mcdonald’s on GrabOn’s main website.

“Localized menu, delivered with precision quality at a price that works”, this was the formula that made McDonald’s click. Today the fast-food giant has more than 320 million customers in India every year, and it all comes down to a simple Aloo Tikki, a humble Chicken Kebab burger, and a modest Naan-styled wrap. What’s common in these dishes is that they’re all very localized, very Indian.

Sure, there were flops just like there were hits. For example, there was a Dosa Masala Burger, that just didn’t work. Oh, and there was a Masala Chai Latte that went away as quickly as it came. But there were quite many other dishes that stuck, and Indians loved them! Here are is a glimpse of these classic Indian McD dishes:

Burgers with an Indian Spice

In the world of burgers, McD remains unchallenged. The fast-food chain provides the choicest of options for Indian taste buds. The non-vegetarian options include McChicken Burger, McSpicy Chicken Burger, Chicken Kebab Burger, Filet-O-Fish Burger, and American Cheese Supreme. And then, of course, there is the Indian version of Big Mac, the Chicken Maharaja Mac.

Vegetarians have more options in an Indian McDonald’s than any other. The fare starts from as low as Rs.49 with McAloo Tikki Burger. Others from the spread include McVeggie Burger, American Cheese Supreme, McSpicy Paneer Burger, and the Veg Maharaja Mac. We have already mentioned the coupon above where you can get a free McAloo Tikki burger free on any order of Rs. 199 and above.

And Wraps to Die For

Whether vegetarian or non-vegetarian, there is a Big Spicy Wrap for everyone at McDonald’s. The giant has also introduced Chatpata Aloo Naan and Chatpata Kebab Naan, which may be Indian in the formula, but are other-worldly in taste.

Here is a wholesome menu of sides, fries, and everything nice. From Veg Pizza McPuff, Masala Wedges, and Fries to Chicken Strips, and Chicken McNuggets. There is also a Piri Piri option for those who like a shake-shake bag.

With devilishly delicious muffins and soft serves on the menu, you will never be disappointed. End your meal with a tub of McFlurry Oreo, or indulge in the Brownie Hot Fudge. New entrants like the Vanilla Chocolate Muffin and the Chocolate Chip Muffin are also a must-try.

And Of Course, Drinks from McCafe

A variety of teas like Strawberry Green Tea, Moroccan Mint Green Tea, and English Breakfast Tea are served at McCafe. For coffee-freaks, there are lattes, americanos, cappuccinos, mochas, and flat whites. There are also iced teas, frappes, coolers, shakes, and smoothies of all kinds. But what we swear by is McDonald’s Hot Chocolate and its American Mud Pie.

This is where our story starts. 1996, the year when McDonald’s opened its first store in India. But let’s backtrack a little. How did McDonald’s reach here?

It was in 1994 that McDonald’s contacted Amit Jatia. In 1995, the deal was made – Jatia was to be their partner in the south and west India in a 50:50 joint venture. He opened the first McD store in 1996, but it wasn’t until 2009 that he actually started to make profits. The perseverance of 15 years paid off, and by the end of 2010, Jatia had bought out McDonald’s stake in the south and west ventures and became the sole owner of McDonald’s India.