Home » Travel » Delhi Vs. Mumbai: Which City Is Better?
Travel

Delhi Vs. Mumbai: Which City Is Better?

There are few debates that are as old as time itself: Men vs Women, Marvel vs DC, Batman vs Superman(they even made a movie about it!), etc. However, nothing is older or more intensive than the old, Delhi vs Mumbai. These cities are always arguing and trying to get a one-up against one another. While Mumbaikars complain that Delhi has no civic sense and embodies everything that is wrong with the country, Delhiites complain how posh and pretentious Mumbaikars are. We decided to go past the BC-MC and SoBo quips and do better analysis, settling this debate for once and for all. We decided to argue on certain points that no one else seems to argue on- you know, the important ones.

If you are planning for the next trip to India’s Mumbai (commercial capital) or Delhi (National capital) then you might want to check Makemytrip. Do check out some of the best discounts for flight ticket bookings in India.

Delhi Vs. Mumbai Comparison – Which city is better to live in?

One of the most important factors about judging a city is undoubtedly its safety. Whether you are a tourist or a resident of a city, it is extremely important to know how safe the city you are traveling in is. 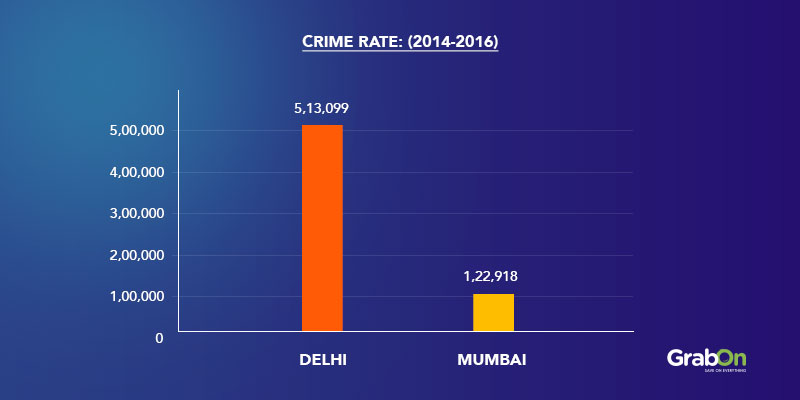 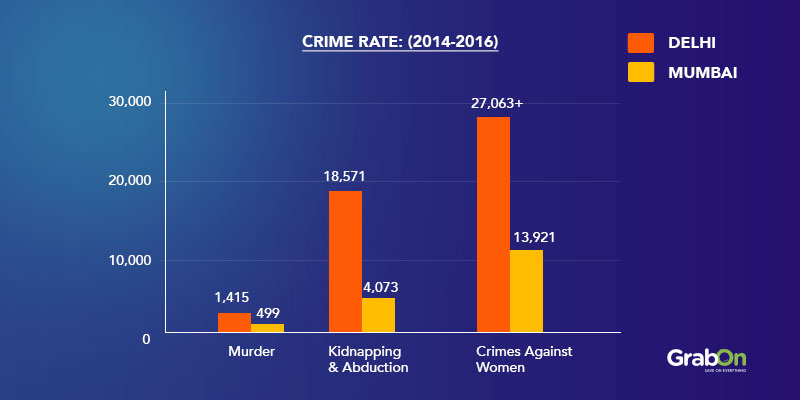 Based on these rankings, it is absolutely clear the Capital of the country is not exactly the safest place to be. Guess Mumbai is the more civilized one after all..*cough cough*

Verdict: Mumbai wins this round, hands down. And by a huge margin!

Fancy some long-breathing and pranayama every morning? Oops! The top 9 of the top 10 polluted cities in the world are in *collective gasp*…India. 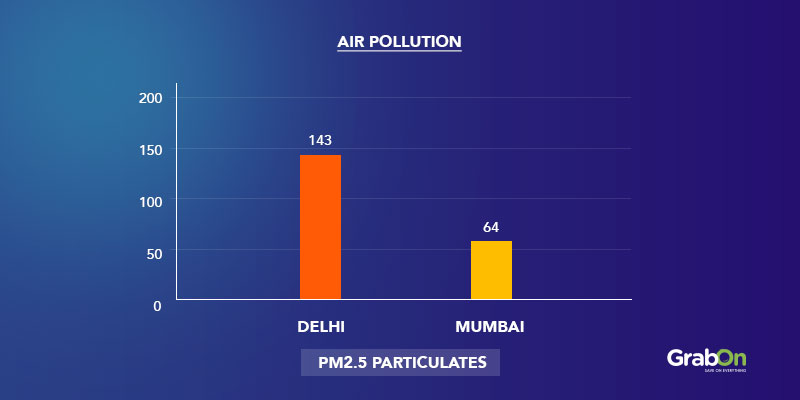 Verdict: Mumbai wins this round as well!

The Ease of Doing Business Index was originally created by the World Bank. If the ranking is high, it indicates that the resources available in that state are better. It also indicates stronger property rights within the state or country. 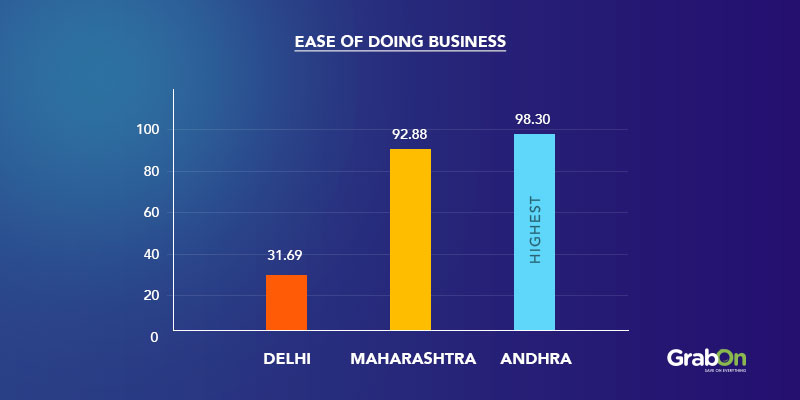 Source: Ministry of Commerce and Industry

P.S: Although this is a state-wide comparison, it can be inferred that Mumbai, the finance capital of the country, ranks better when it comes to ease of doing business. Delhi loses this one again! Argh! Buckle up, Delhi!

Cost of living is defined as the “cost of maintaining a certain standard of living.” The cost of living can also be defined as the cost required to maintain a living standard in different geographical locations. According to Mercer, the world’s largest human resource consulting firm: 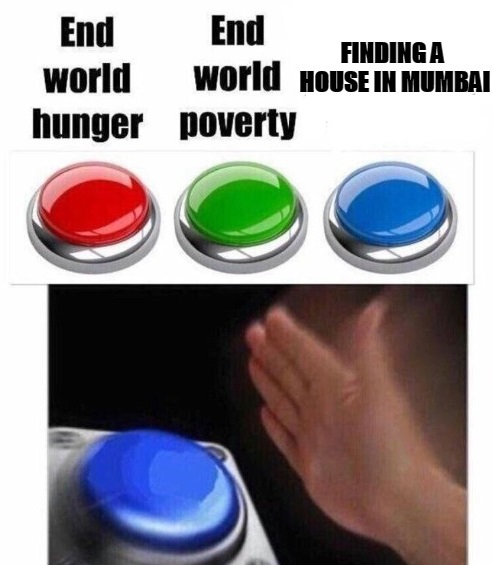 Delhi wins this one, hands down! Let’s not forget how expensive rents can be in Mumbai. According to old folklore, you have better chances of finding Atlantis than a house in Mumbai. Even a simple 1bhk can go up to 25K/month in Mumbai. Delhi, although quite expensive, is much better than Mumbai.

Gross Domestic Product or GDP is defined as “the monetary measure of the market value of all the final goods and services produced in a period of time.” 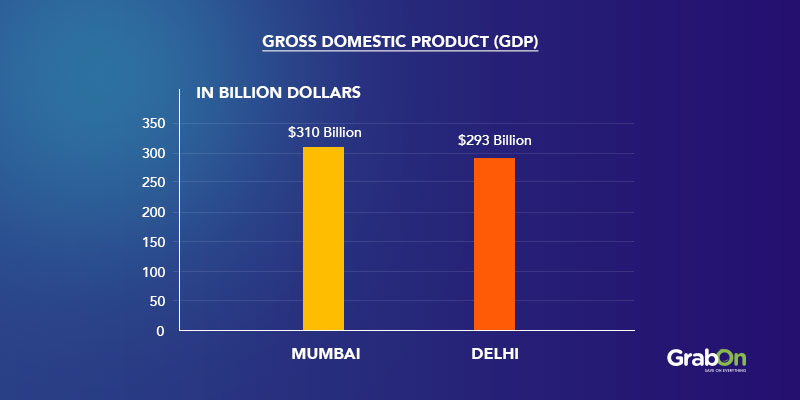 P.S: Here, the GDP is measured based on GDP at PPP (Purchasing Power Parity). It basically means the purchasing power across different cities in regards to an equal denomination. In this case, it is Rupees.

Another important aspect to measure if the cities are going to make your stay comfortable are their literacy rates. Literacy rates also help you tell how much progress these cities have made. 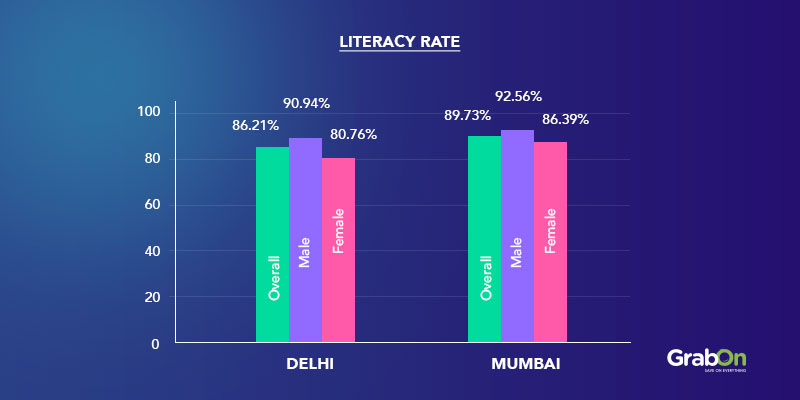 Mumbai fared far better than Delhi in terms of literacy rate, thus not breaking the stereotype Delhi has. Guess that settles it then…

Foreign Direct Investment (FDI) Inflow is defined as “the value of the inward direct investment made by non-resident investors in the reporting economy”. Which means, how much investment is done in that geographical region by investors from other states/countries. 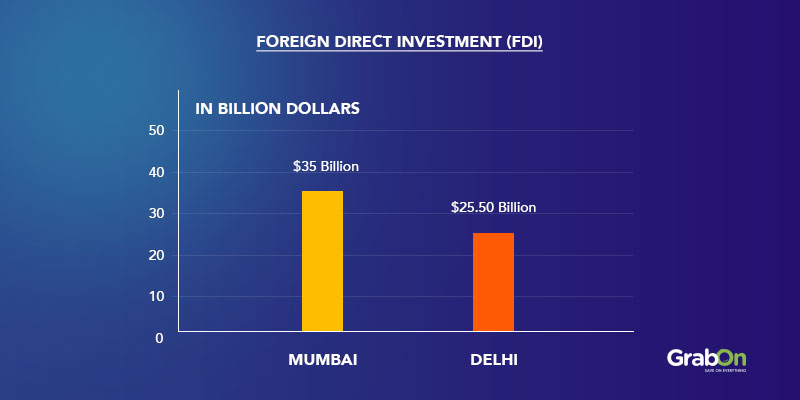 Someone make the Mumbai juggernaut stop? Guess there is absolutely no winning with Mumbai.

(Guess there is absolutely no winning with Mumbai.)

The reason of existence. Food is that one thing we just cannot live without. And considering that these two cities have some of the best food in the country, this just gets tougher. 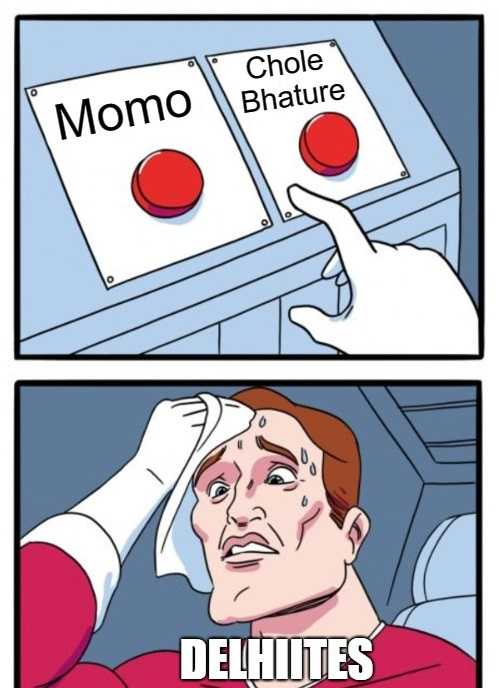 When it comes to food, these two cities go neck-to-neck with choices and both can spoil you completely. So, when it comes to food, it is a close tie. We are gonna go with a tie because we love food and choosing one food over another is a cardinal sin (unless it is a Pineapple Pizza because that sucks).

Also, hot take: When it comes to food, these two cities got nothing on Kolkata.

Weather is much more diverse in Delhi than Mumbai. While Delhi experiences the highs and the lows (and the in-betweens), Mumbai is kind of about the highs only… 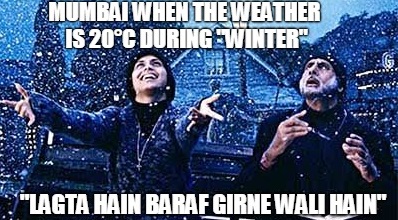 Wohoo! Delhi is back into the game… I guess? Anyway, the weather is probably one of the most important factors you consider before you move to another city. Considering that Delhi won this bout, things are looking good!

How we wish we all had Aladdin’s magic carpet or the Jetsons’ time portal. But sadly, we don’t. Hence the over-relying on transportation. 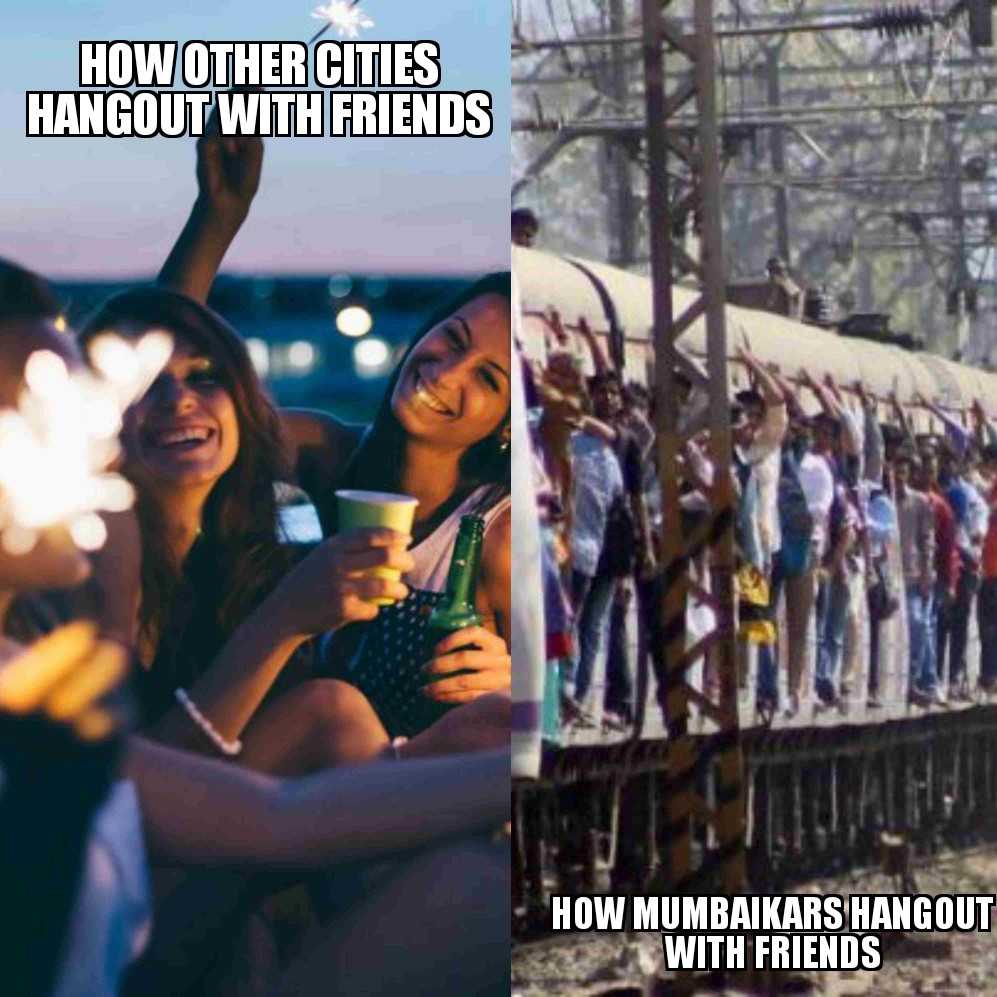 That wasn’t hard to guess, considering what hanging out means in Mumbai. Not to forget, the autowallahs in Mumbai reject you more than your parents reject your Goa trip. Delhi wins another important metric as well!

So, that’s our take on the Mumbai vs Delhi debate. Let us know if you agree. And if you want to unload your thoughts and abuses(if you are from Delhi), let us know in the comments!

How to Make Easy Savings on EaseMyTrip in 2022

Top 10 Holiday Destinations in India you must Visit

Best Shampoo for Dogs in India