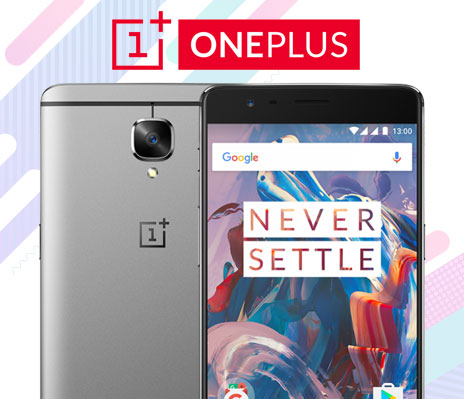 Go For The Best. Don’t Settle For The Rest

Ever since OnePlus burst onto the scene it has taken the mobile world by storm. Staying true to the tagline ‘Never Settle’, OnePlus has ushered in a new era of innovation and technological advancement. With a dedicated fanbase and a very involved community, OnePlus continues to churn out devices that don’t depend on specifications to wow the audience rather use it as means to better the user experience. No matter how technologically advanced the phone is, getting better never stops. As such, the OnePlus 3T vs OnePlus 3 is something to take note of. Beating it’s predecessor in the battery capacity department and the front shooter, OnePlus 3T edges the competition with a Snapdragon 821 chipset. It’s not exactly a surprise that any OnePlus 3T review is all praises for this mid-range priced phone.

Age Of The Flagship Killers

The one thing that separates OnePlus from most other mobile phone manufacturers is the fact that they build phones in close collaboration with the end user like yourself and the tech experts. OnePlus 3T is perhaps the best example in this case. When it comes to features and specifications, OnePlus 3T specs are designed to be practical and functional so as to aid the user experience and not showboat. Offering a superior experience at a much lesser price than most mainstream mobile phones is what has worked out so well in the favor of OnePlus and nowhere is this more evident than OnePlus 3T.

Fast charging of smartphones is not a very new concept but what OnePlus has done with its revolutionary Dash Charge, is making the fast charging safer and much faster. The Dash Charge enables your OnePlus phone to operate throughout the entire day with just 30 minutes of quick charging. This Dash Charge keeps your OnePlus 3T phone running even after a day of playing videos, playing games which are heavy on graphics, all the while using navigation and tons of other apps. One might ask but how does OnePlus accomplish what most quick charge technologies? The answer lies in the innovativeness of the phone. Instead of relying on increased pressure, the Dash Charge produces a larger current thus leading to stable charging at a consistent speed. This makes sure that after every hour of intensive gaming you don’t have to run towards the socket! If you need any more reasons to prove OnePlus ingenuity, then look no farther than OnePlus 3T’s lighter weight battery yet packing a beast of a 3400 mAh.

OnePlus For Specifications That Enrich Experience

From the beginning, OnePlus was all about delivering more than just a better phone. What started out in 2013 was an effort to provide a ‘better way of doing things’ as OnePlus puts it. By building a large and involved community, OnePlus has struck a chord with the users, thus understanding and listening to what they actually want in a phone they would want to own. This is evident in the way they improved their quick charge technology, moving the using the heat dissipating elements and systems that manage the power to the Dash Charge adapter so that your OnePlus phone can perform without heating up.

The impressive specifications can be seen in the upgraded front shooter of OnePlus 3T that comes with a 16 MP sensor that lets you stream videos in HD. Small yet meaningful features like Smile Capture that takes your photo automatically once you smile, is precisely the reason why OnePlus prides itself on providing specs that actually matter. And that’s not all, the front camera helps you take sharper and clearer images by negating the noise by combining pixels to shed more light. Among the arsenal of functional specifications is the lightning fast shutter speed, snappy and quick autofocus, EIS technology 2.0 and Optical Image Stabilization lets you take sharper and crisper images without blurring due to jerks or sudden shaking of hands. OnePlus 3T specifications also include modes such as ISO, Fine-tune exposure, and RAW image file support that helps you edit photos post clicking. In other words, OnePlus 3T doubles up as a DSLR!

OnePlus 6T: There’s A New OnePlus In The Town Only On Amazon!

The beloved franchise OnePlus has once again become the talk of the town with their latest flagship offering in the form of the OnePlus 6T. Living up to its grandeur, OnePlus 6T is everything a killer phone should be made up of. With a sophisticated design and a slim cut-out, this phone is not only beautiful on the outside but also on the inside. It has a Optic AMOLED 6.41 inch display, with a full HD resolution (2340x1080) with a 402 ppi density. We know; that’s pretty cool! With a cool new fingerprint unlock scanner, why do you want to be stuck with a mediocre phone! If you want brilliant photos and selfies, this phone is perfect for you. It comes with a dual camera of (16+20) MP, packed with a lot of other cool features. And where can you store all those amazing memories? On your 256 GB storage! Yep, you read that right! Found exclusive on Amazon, you can get OnePlus 6T and the limited edition of OnePlus 6T Mclaren (which is packed with WAY better specs!)! The price of OnePlus 6T starts at rs. 37,999 and the Mclaren version goes up to Rs. 50,000. If you always wanted a killer budget phone, packed with unparalleled tech, this is your chance!

Back In Midnight Black!

Black lends a certain sophistication to a phone that is quite difficult to match. The world has been waiting for an all-black OnePlus phone for quite some time and boy oh boy, have they delivered! After variations like the OnePlus 3T Gold and Gunmetal, they have finally came out with the OnePlus 3T Midnight Black and it is everything that any aesthetic loving person could’ve ever wanted. The limited edition OnePlus 3T Midnight Black comes through the painstaking process of trying over 30 odd variations of the color black. Known for sweating it out over the tiniest of details, OnePlus finally produced the premium all-black phone by applying a 14-micron thick coating on the regular space-grade aluminum thus resulting in the awe-inspiring black all the while retaining the look and feel of the metal that most of the OnePlus users are acquainted with. This phone comes with a 128GB of storage. You can rest easy that your OnePlus 3T will look as good as the day you bought it, thanks to the anti-fingerprint layer that comes coated with the phone. Smart Capture Camera and Dash Charge are retained in this suave and stunning all-black premium phone.

Best Offers To Save BIG On OnePlus 3T/5T/6T

OnePlus 3T India release meant one question for the fanatics and casual fans alike: OnePlus 3T price in India? If you are planning on owning a OnePlus 3T, Amazon is where you should head to. Starting at a base price of Rs 29,999 for the Gunmetal variation, the OnePlus 3T price is definitely a value for money buy. In this day and age, ordering phones over the internet have become a norm rather than visiting the offline stores. Same is the case for OnePlus 3T, buy online from the comfort of your home. Even though it comes with a Corning Gorilla Glass 4, prevention is better than cure and that means OnePlus 3T cases and mobile covers are a better way to go about it. You can, however, save big while shopping for Oneplus 3T online by availing deals, discounts, and offers. Get the best OnePlus 3T offers and deals only on GrabOn. Grab the hottest and most recent offers, be it One Plus 3T or OnePlus 3T cases. Keep an eye out for this regularly updated page and save big on your One Plus 3T purchase.

Oneplus 5 is the new offering from the makers of flagship killers like OnePlus 3T. The new smartphone from OnePlus launched on 15th June 2017.
The most prominent features that excite most people are:

For those wondering about the Oneplus 5 price in India, it is in the price range of Rs 30,000 to Rs 40,000 with models with higher storage to be on the higher end of the range.

OnePlus 3T is the new addition to the never settling line of phones from OnePlus. Built with care and expert craftsmanship, this smartphone has been designed keeping in mind the feedback from the community. The company believes awesome specifications mean nothing unless they yield great user experience, naturally OnePlus 3T specs are practical and just like its predecessor offer unmatched experience backed up by state of the art hardware and painstakingly tested software upgrades. Debuting a killer new look, OnePlus 3T Midnight Black will surely send the fans into a state of perpetual frenzy! This all-black phone radiates pure class and premium. Make no mistake, with OnePlus 3T specifications like smart capture camera and dash charge, the phone is far from all looks and no functionality. In a OnePlus 3T vs OnePlus 3 matchup, it’s a pretty close competition with the latter beating the former in terms of chipset, internal memory, battery, and secondary camera. If you happen to be in love with the color gold, then there’s good news for you in the form of OnePlus 3T Gold. The other color variants include Gunmetal and Black. Running on Snapdragon 821, OnePlus 3T 128 GB comes with a 3,400 mAh battery and is capable of going through the entire day with only half an hour of charge, all thanks to the Dash Charge feature. After going through the OnePlus 3T review, in fact quite a lot of them mostly raving about the phone, don’t you wish you had one? Well here is where the question that’s been bugging all the fans ever since OnePlus 3T India unveiling and release, comes in: The OnePlus 3T price in India. Available on Amazon the OnePlus 3T price starts at Rs 29,999. When it comes to OnePlus 3T, buy online with amazing discounts and offers. Get the best deals on OnePlus 3T price and save big on OnePlus 3T cases with amazing offers, only on GrabOn.
show more