On this Republic Day, (observed on the 26th of January each year), here are some major highlights about all the Prime Ministers, and their historic decisions that have impacted the lives of many in the country.

So far, since the nation made its transition to a republic in the year 1950, and the day when we as a nation adopted the constitution, or since the Independence, India has witnessed 14 full-time Prime Ministers, with Mr. Narendra Modi of the Bharatiya Janata Party (BJP) heading the office at present as the 14th Prime Minister. Currently, Mr. Modi continues to serve as the Prime Minister of India after throwing Dr. Manmohan Singh of the Congress-led UPA government out of power in 2014, and in 2019 won a landslide victory in the general elections. 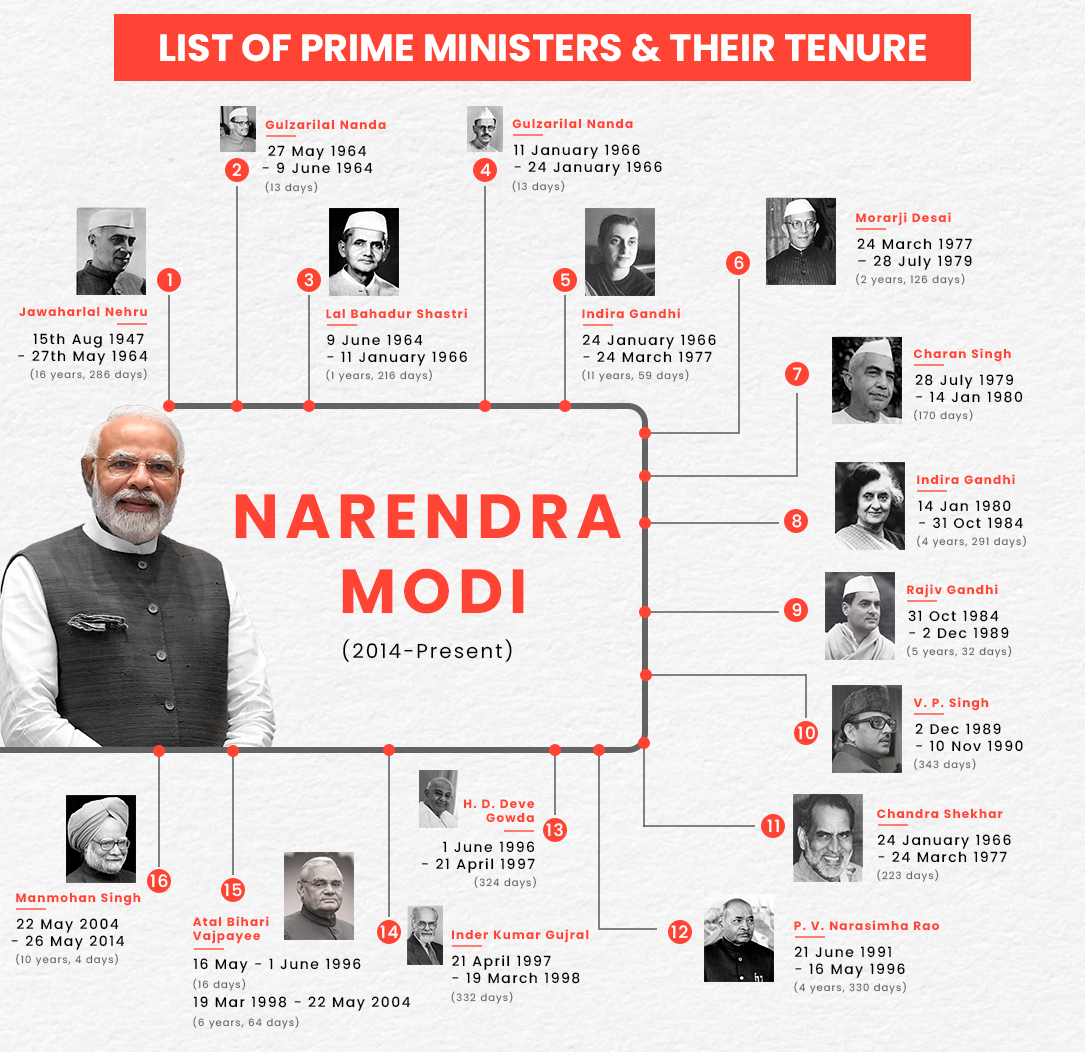 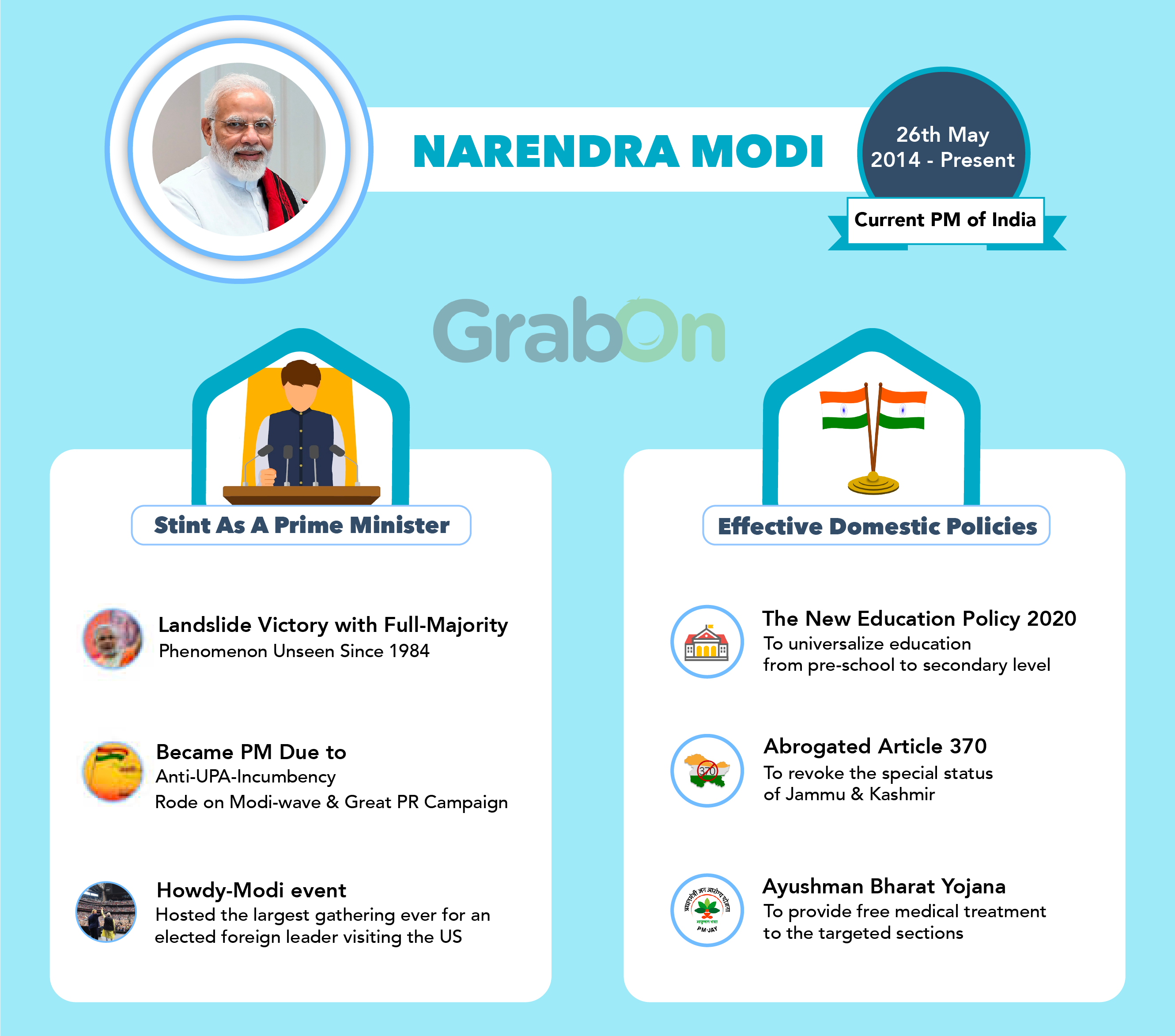 After coming to power after riding the ‘Modi Wave’, Mr.Modi went on to create history by becoming India’s most popular Prime Minister. Currently the 14th Prime Minister of the Country (Gulzarilal Nanda’s tenure was considered to be acting PM), Modi went on to bring massive economic reforms. Before becoming the PM, he was the Chief Minister of Gujarat from 2001 to 2014. In 2019, a UK magazine poll voted Modi as the world’s most powerful leader.

In regards to some bold decisions, and achievements ever since Mr. Modi took charge as the Prime Minister of India, the announcement of Demonetisation, way back in 2016 was the boldest move ever made to date. The decision to scrap high-value bank notes, (both Rs 500, and 1,000) is said to have powered the nation’s economy, and improved tax compliance. After this, the introduction of the Goods and Services Tax (GST) is considered to be the biggest ever tax reform since Independence, all in a bid to boost government revenues, and bring millions of organizations into the tax net. Following this, the abrogation of Article 370 to bring the Union Territory of Jammu and Ladakh into the mainstream was another great move, followed by the poll promise of the construction of Ram Temple, which is all set to be completed in 2023.

Some of the key achievements in the welfare sector include the ‘Sabka Saath, Sabka Vishwas’, which brought in a new dimension in governance that is development-driven, and free of corruption. Today, India is home to the world’s best and largest healthcare programmes that covers more than 50 crore Indians, with Ayushman Bharat offering the best healthcare to the pro-poor of the nation. Thanks to PM Modi’s unwavering efforts to promote, and prioritize universal health coverage.

Pradhan Mantri Kisan Samman Nidhi is yet another welfare scheme that received applause worldwide. Through this scheme, the government sends Rs 6,000, directly to the bank account of farmers in three installments. In addition to this, the withdrawal of the most controversial farm laws as a mark of respect to the farmers of India won hearts. Other than this, there are countless initiatives that the Modi-led government at the Centre introduced such as Beti Bachao, Beti Padhao – an initiative that celebrates the birth of girl child, the rollout of the JAM trinity: Jan Dhan, Aadhar and Mobile to power welfare subsidies directly into the bank accounts of the poor, and the boost to entrepreneurship with the ‘Make in India’ initiative, powered by new initiatives like the ease of doing business, etc.

In addition to this, Modi launched a housing welfare scheme, the “Pradhan Mantri Awas Yojana (PMAY),” in a bid to provide houses for all. The government also plans to build 2 crore houses throughout India, making it beneficial for the needy. The cost of the houses is very economical and prioritizes senior citizens, women, and SC/ST candidates in the allotment.

On 13th October 2018, Modi’s name was given as the BJP candidate for prime minister for the 2019 general elections, and Amit Shah was the chief campaigner. Before the general elections, Modi launched the “Main Bhi Chowkidar” campaign on 8th April 2019. He contested as a candidate from Varanasi in the Lok Sabha elections. He won against Shalini Yadav, a member of the Samajwadi Party with a whopping majority of 479,505 votes. Later, he was appointed as the Prime Minister for the second-straight time.

We have compiled all the major decisions taken by him to date, take a look at them below!

Place of Birth: Vadnagar, Gujarat
Qualification: Bachelor of Arts in Political Science, School of Open Learning at the University of Delhi
Caste: Ghanchi-Teli 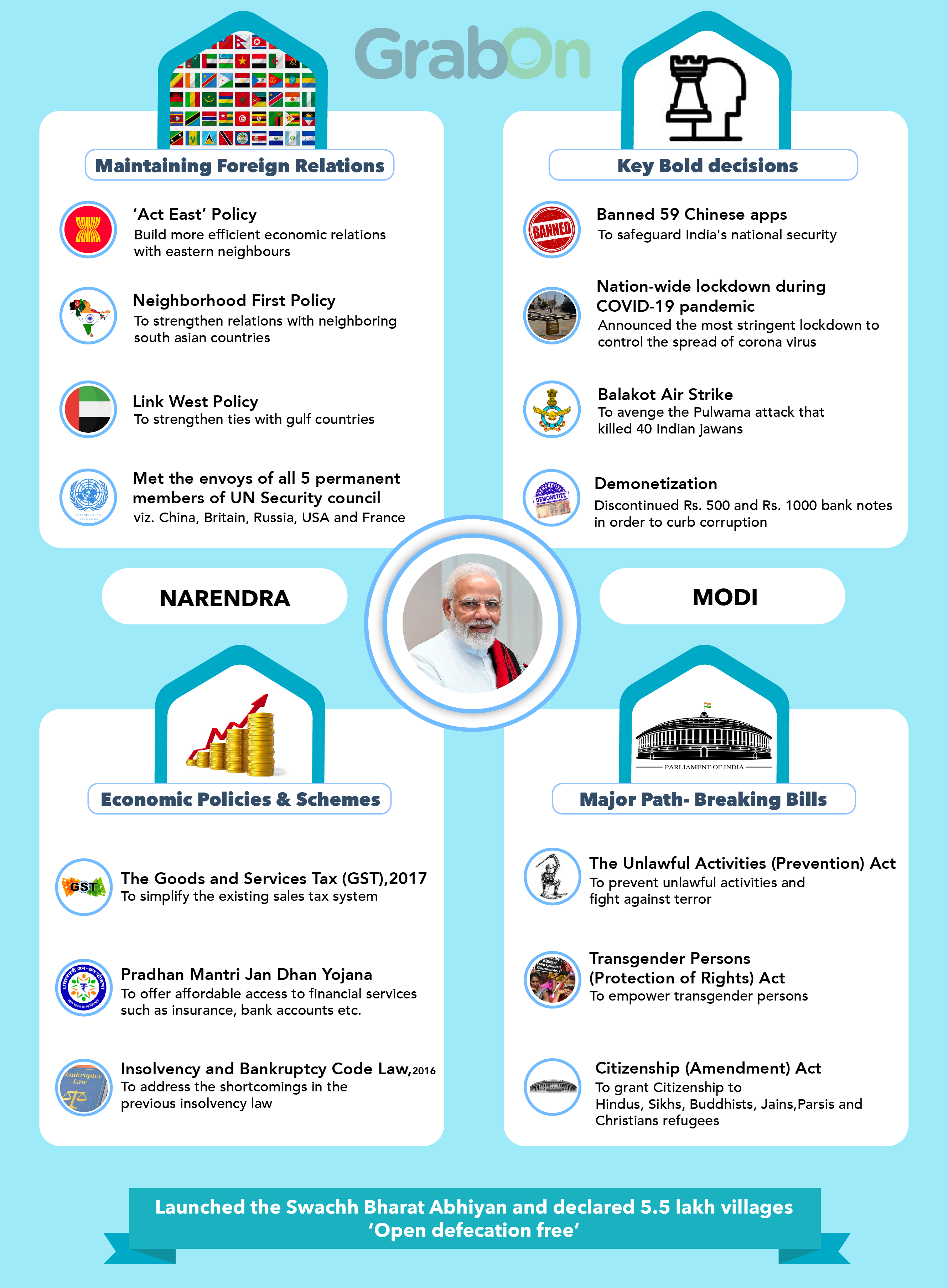 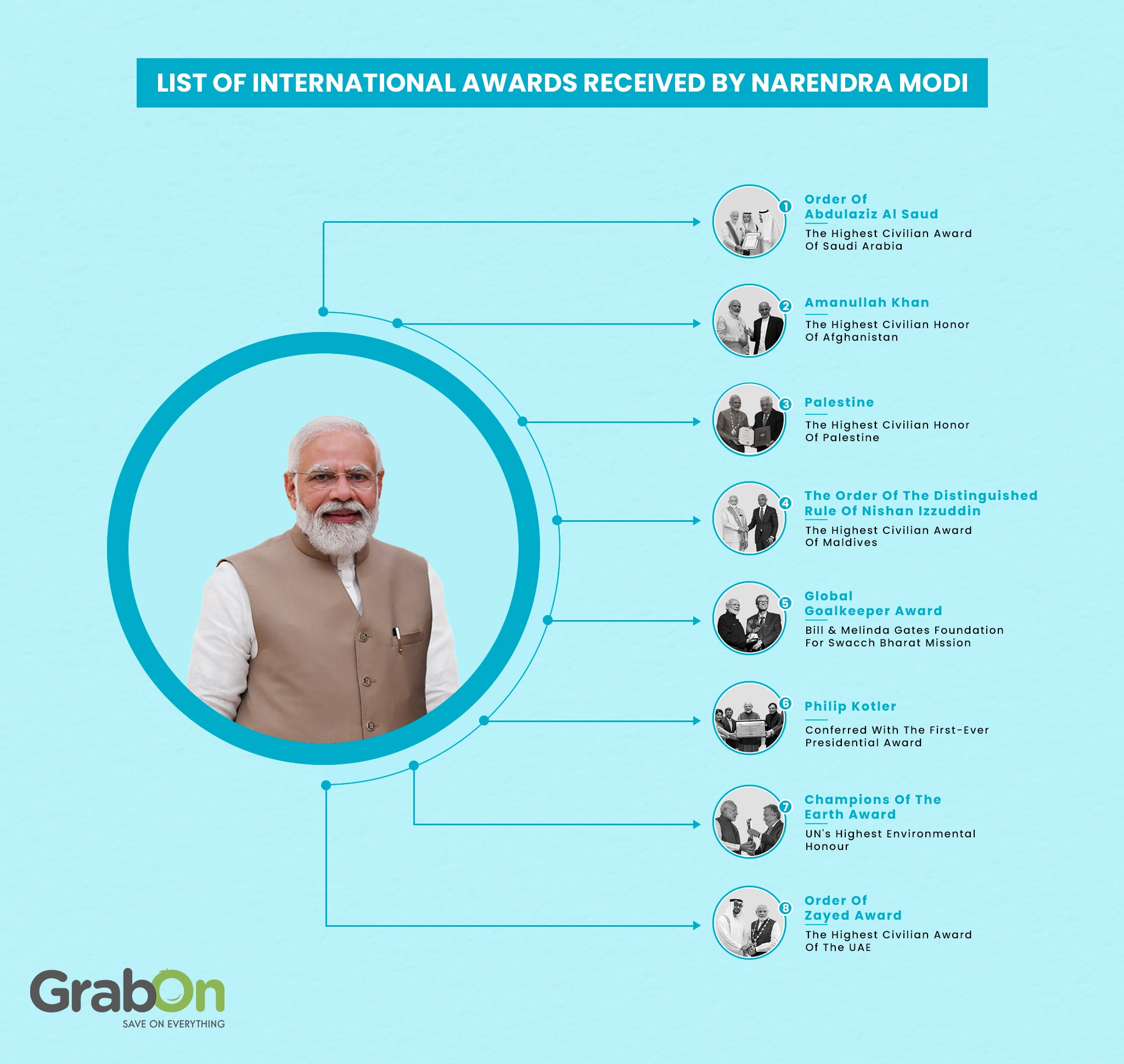 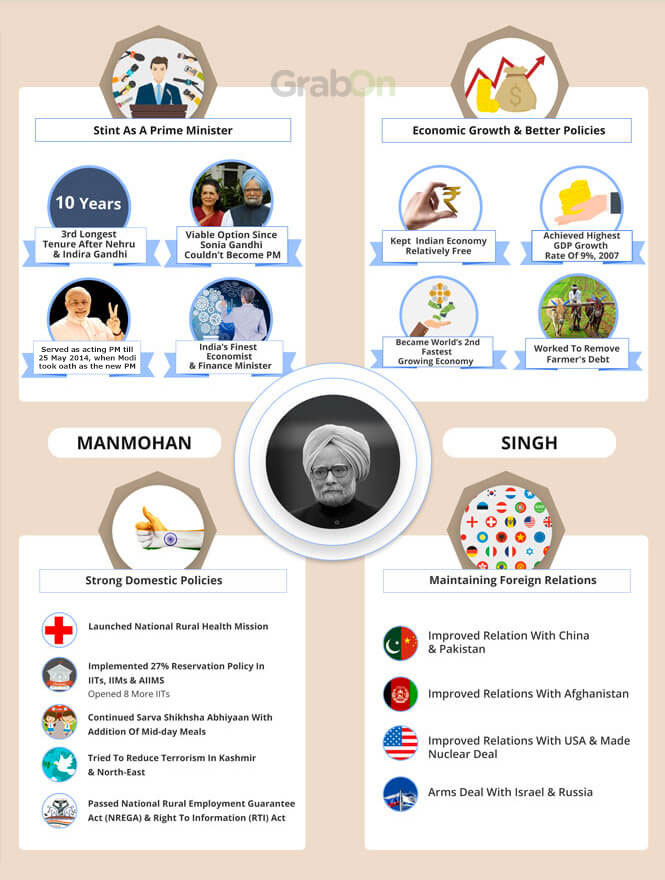 Considered to be India’s best Finance Minister, Dr. Manmohan Singh is considered to be one of the best economists in the country. He joined the Indian government as Economic Advisor in the Ministry of Commerce. He also held various portfolios such as Advisor to the Prime Minister, Deputy Chairman of the Planning Commission and Governor of the Reserve Bank of India. As the Prime Minister of the country, he was in charge of some of the biggest changes in the country. 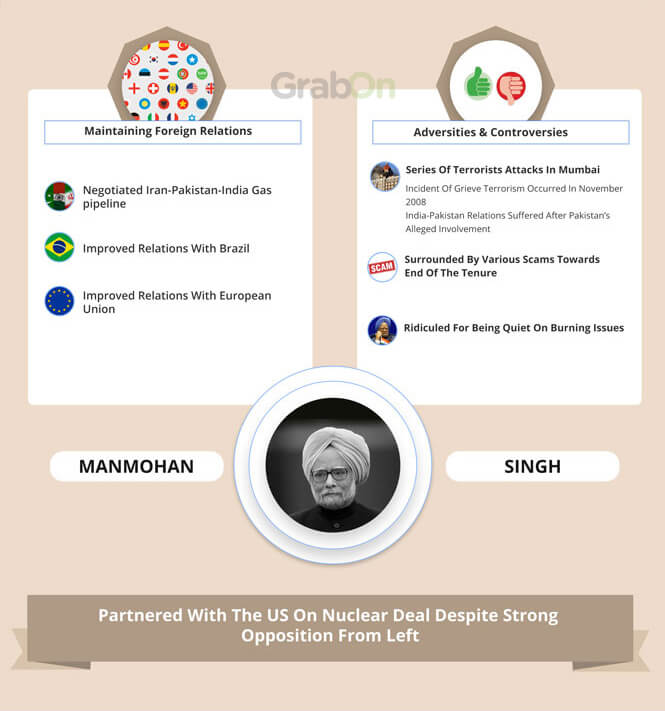 His wonderful achievements include: 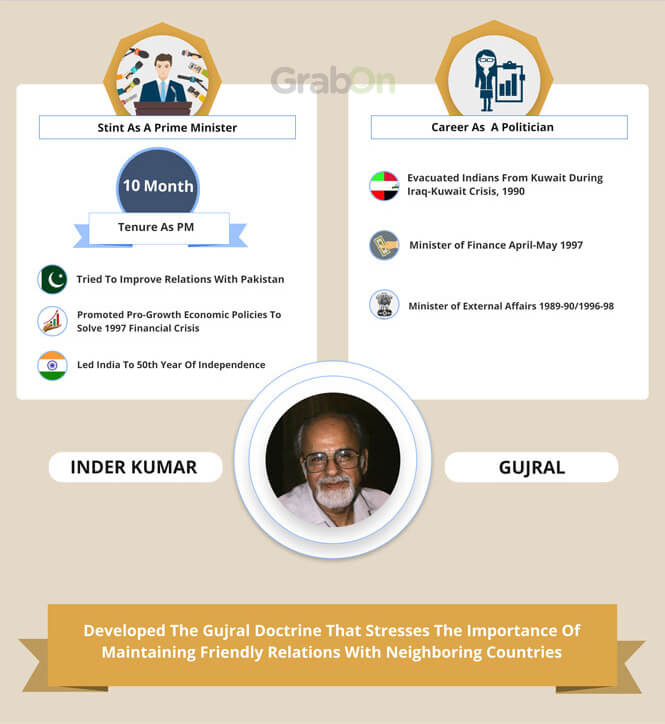 Famous for implementing the Gujral Doctrine, Mr. I.K Gujral was also in office for 10 months. Mr. I.K Gujral held important positions including Minister of External Affairs, Water Resources Minister and Minister of Information and Broadcasting before handling the PM office. Gujral was also a part of India’s freedom struggle and was jailed for taking part in the Quit India Movement. 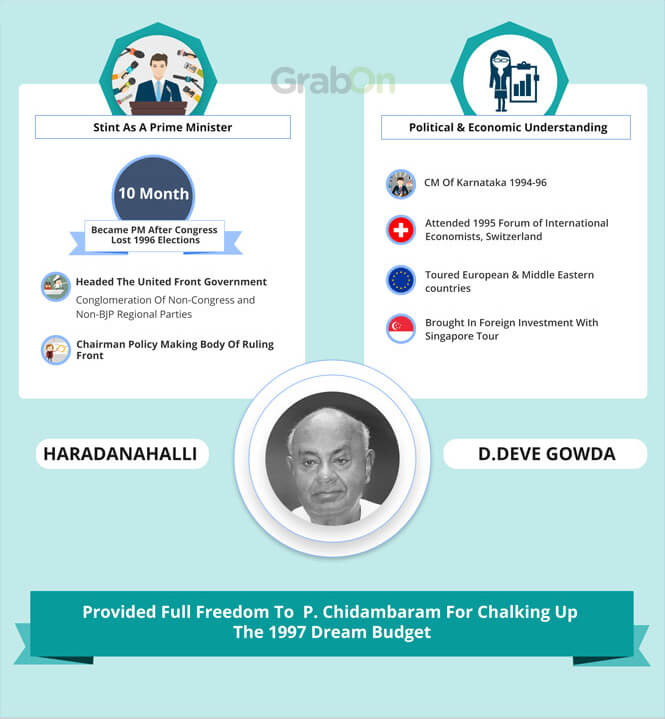 Holding the post for 10 months, Mr. Gowda was also the head of the United Front Government. In these 10 months of tenure, he was also the Chairman of the Steering Committee of the United Front. This was the highest body which was in charge of all the constituents of the ruling front. During his tenure as the Chief Minister of Karnataka, he successfully led the government by tackling many issues. 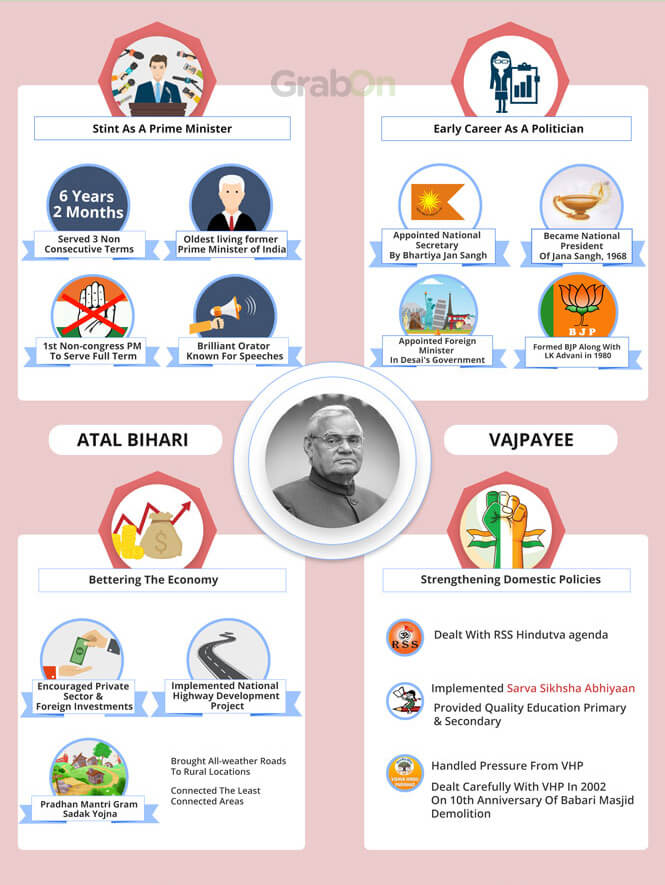 One of the most recognised politicians of India, Mr Vajpayee was the first non-Congress Prime Minister to hold office for a full term. He was one of the co-founder and the first President of the currently ruling Bharatiya Janata Party. Under his tenure as the PM, India transitioned into a new era and saw a lot of changes. His government made efforts to enhance the digital connectivity in the country and made India a ‘software super power’.

His other key achievements include: 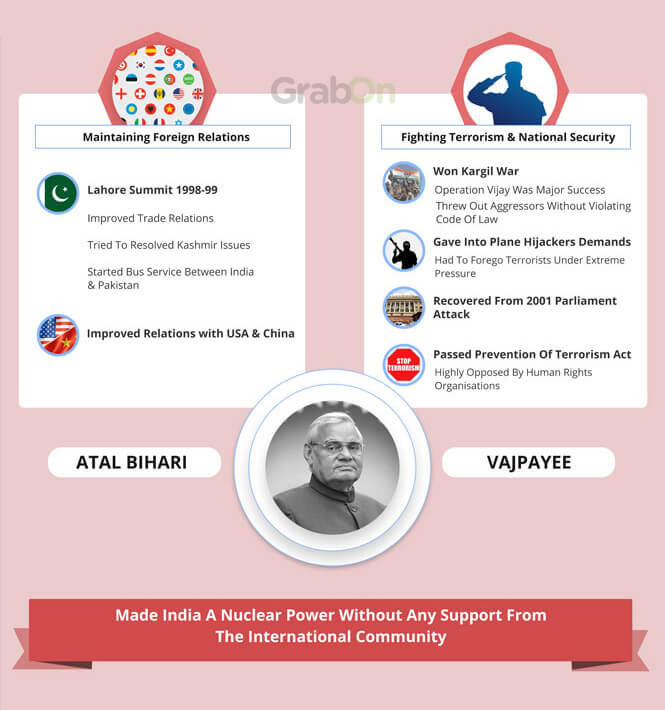 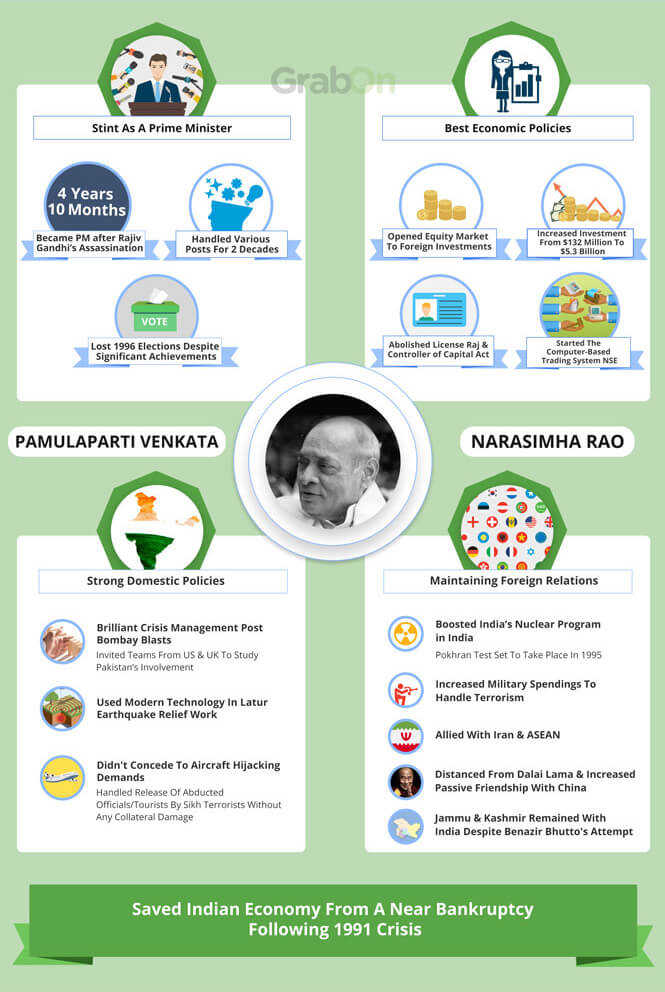 Referred to as the Father of Indian Economic Reforms, Narasimha Rao was instrumental to India’s growth and globalisation. Before becoming the PM of India, he was the Chief Minister of Andhra Pradesh. He also held various portfolios in Andhra Pradesh’s cabinet and was responsible for major reforms in the state. Under his Prime Ministership, India experienced a shift in its economic model; going from a mixed economy to a market economy.

Some of his key achievements were: 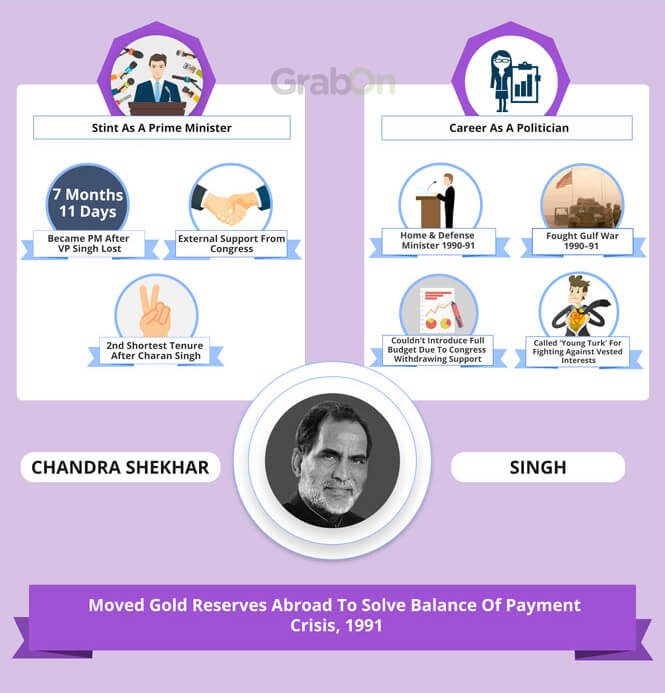 The second shortest tenure after Mr. Charan Singh, Chandra Shekhar’s tenure lasted a little over 7 months. He was attracted to politics from a young age and was known for his revolutionary ideas revolving around politics of social change. He also held the post of Minister of Home Affairs during his period in the office of Prime Minister. Due to the political instability at that point, he couldn’t contribute much. 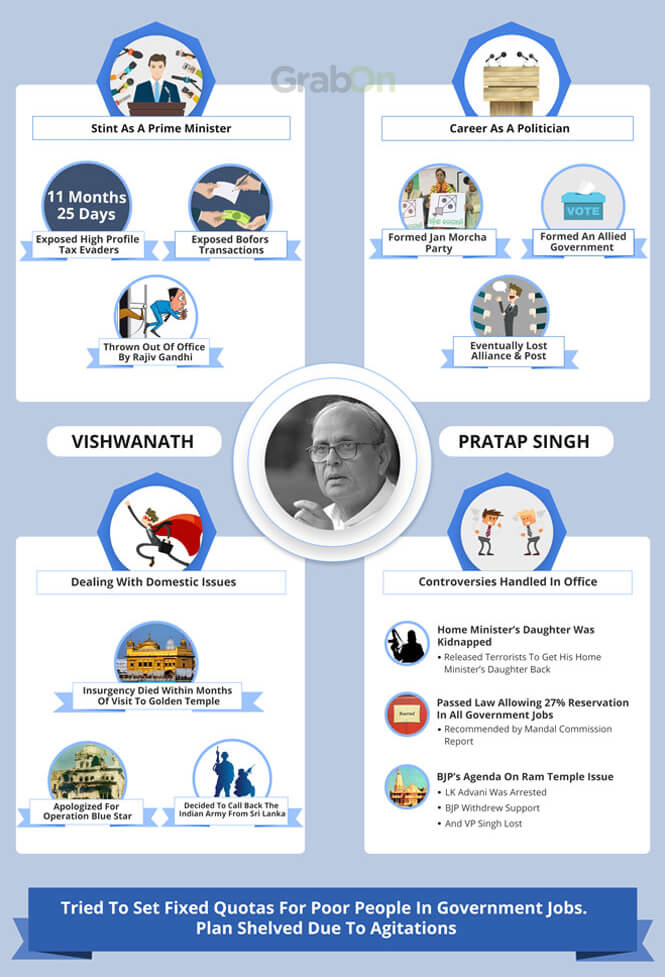 The 7th Prime Minister of India, Vishwanath Pratap Singh started his political journey from the age of 10. Before becoming the PM, he was the Chief Minister of Uttar Pradesh. He also held various portfolios in the union cabinet such as Minister of Commerce and Minister of Finance and Defence. Known for the implementation of the Mandal Commission, during his Prime Ministership, Mr V.P Singh’s short tenure of 11 months was full of interesting developments. 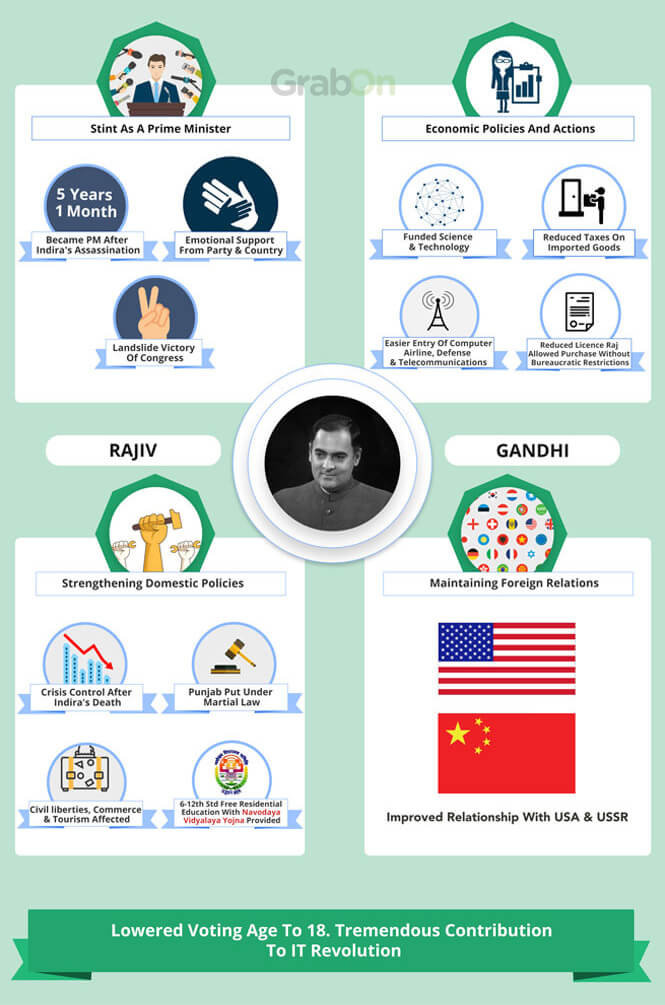 Part of the Gandhi-Nehru family, Rajiv Gandhi was the son of Indira Gandhi. After his brother, Mr Sanjay Gandhi, died in an aeroplane crash, Rajiv Gandhi decided to enter politics. He was (and still is) the youngest person to hold the post of Prime Minister in India. Having acquired a commercial pilot’s license, Rajiv also worked for Indian Airlines. As a PM, he is often credited with contributing the most towards India’s IT revolution.

Below are some of his key achievements. 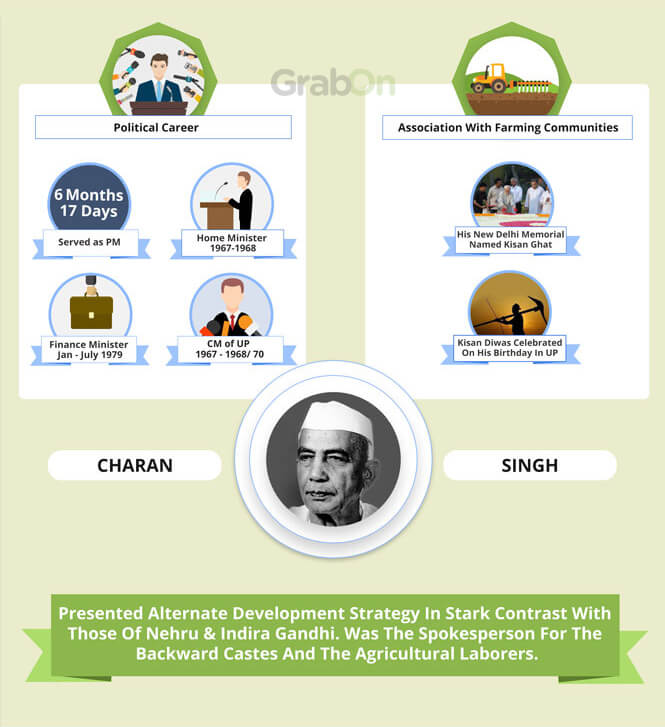 Considered to be the champion of peasants, Chaudhary Charan Singh enjoyed a brief time in the office. A lawyer by profession, Singh served Uttar Pradesh in various capacities and was known for raising his voice against corruption, nepotism and inefficiency in the administrator. He is also the man behind major land reforms in UP. He was an avid reader and author of several books including ‘Abolition of Zamindari’.

During his short tenure, he made the following key decisions. 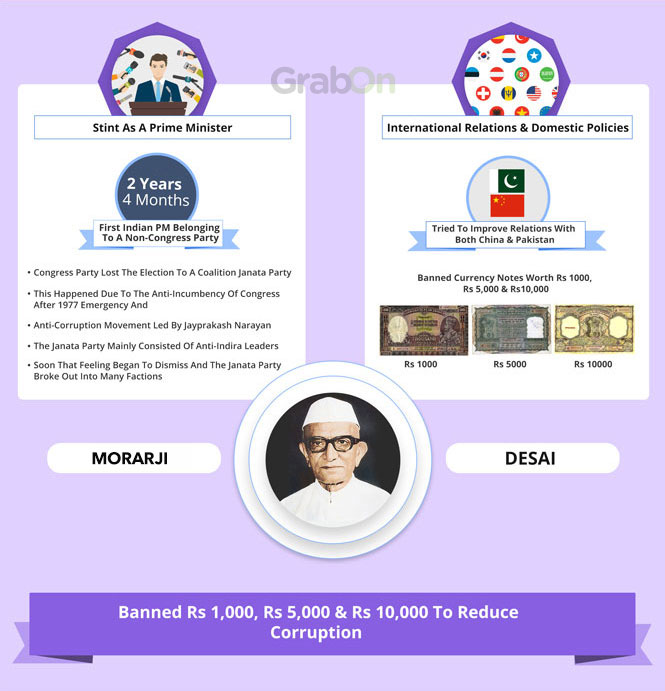 The first Indian PM who was not from the Congress party, Morarji Desai was (and still is) the oldest person to hold the Prime Minister’s office. A renowned independence activist, Desai led the government formed by the Janata Party. Before serving as the PM, he was the 2nd Chief Minister of Bombay state from 1952 to 1956.

In his two years in the office as India’s Prime Minister, he brought about some major reforms. 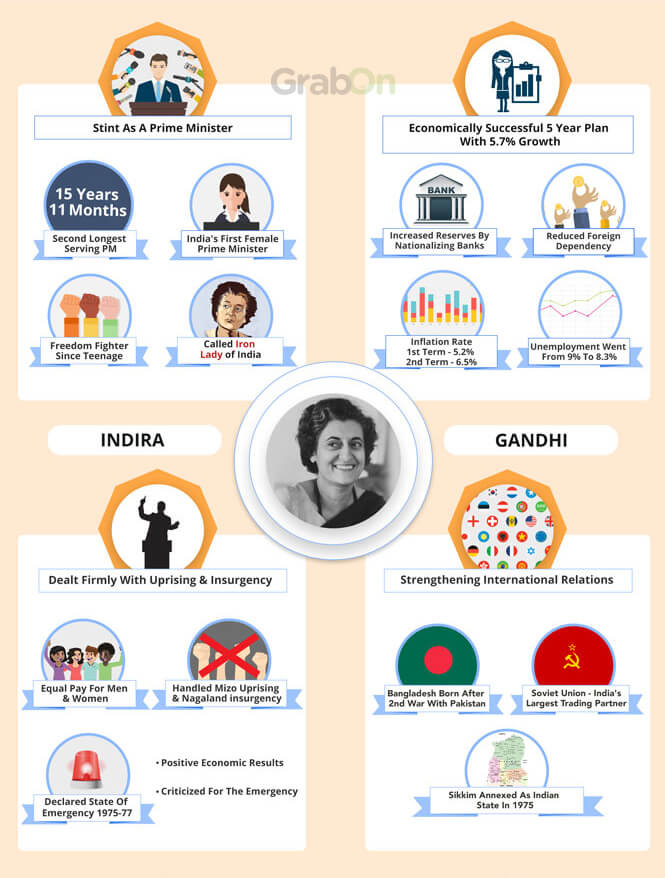 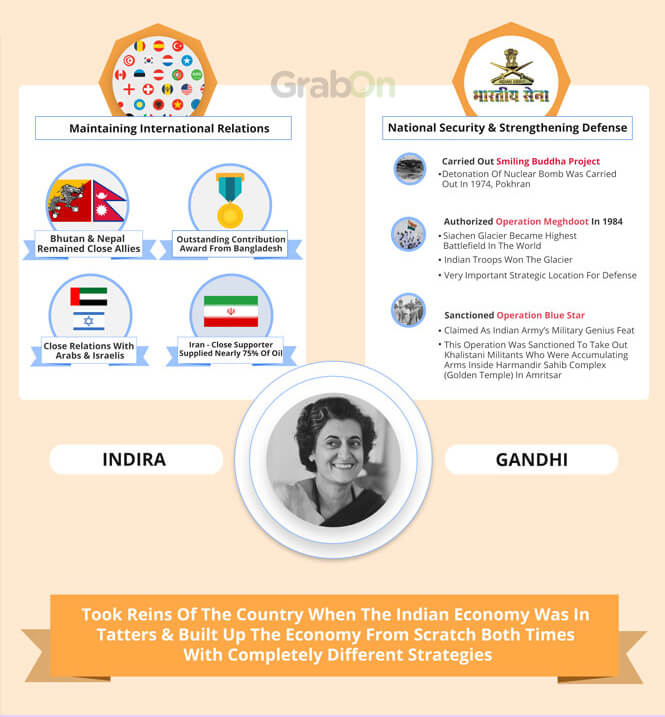 Her key achievements are: 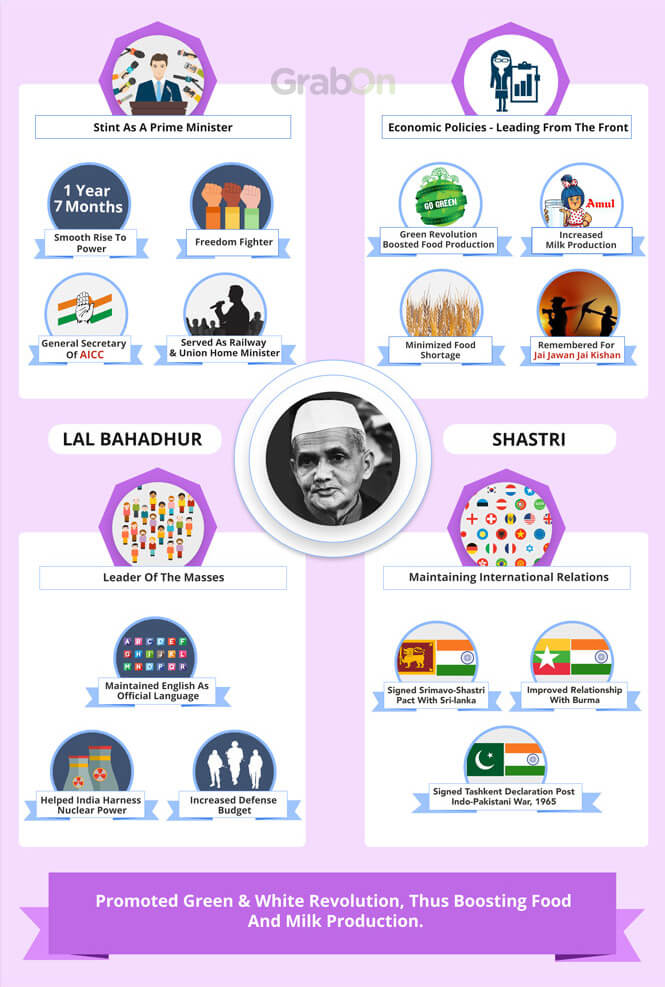 Considered to be a leader of the masses, Lal Bahadur Shastri also served as the Railway Minister and Home Minister. In his two-year tenure, before his tragic death, he brought in some key achievements. His famous slogan ‘Jai Jawan, Jai Kisan’ during the 1965 Indo-Pakistan to cheer the soldiers and farmers was extremely popular. 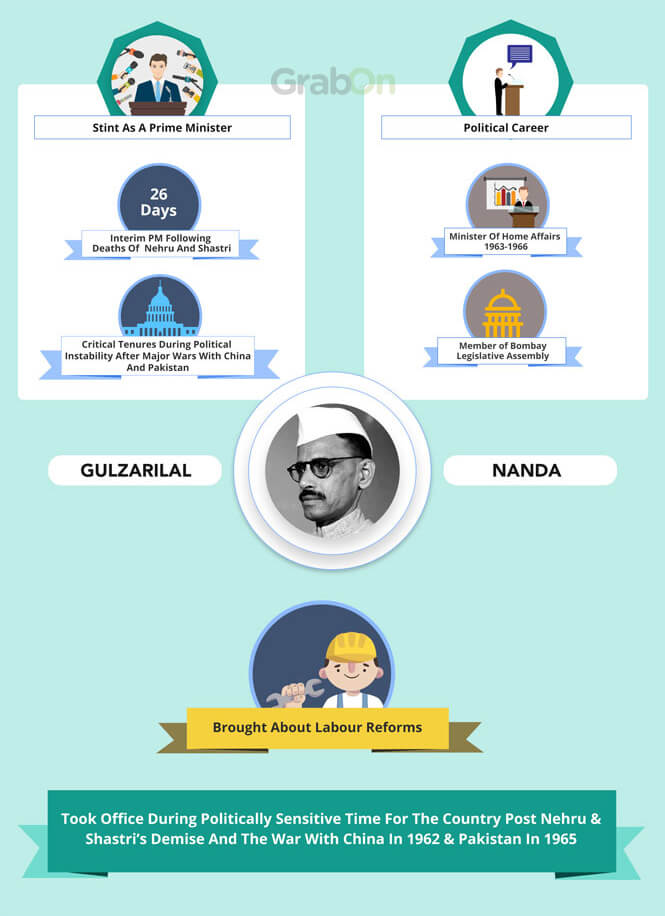 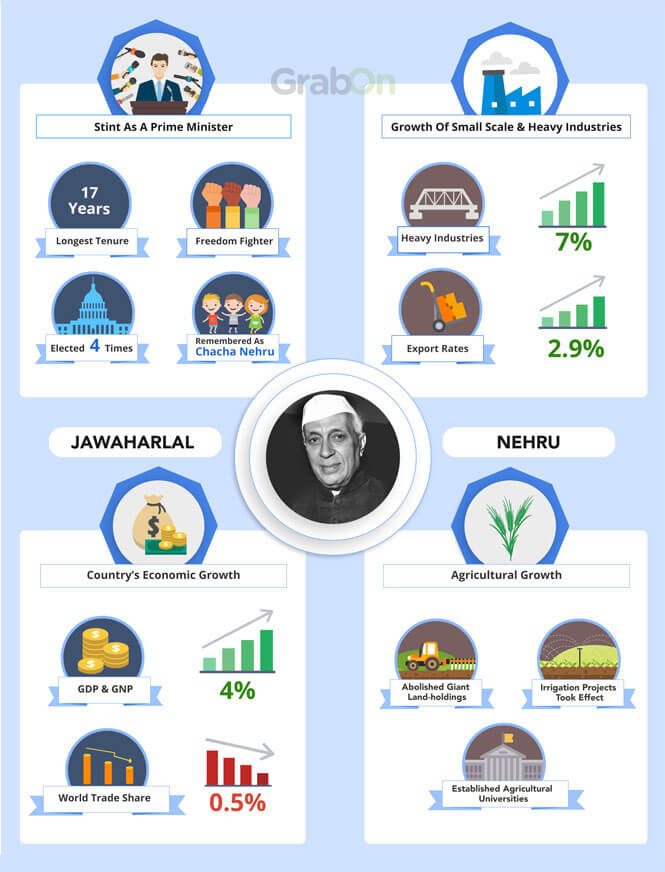 About Jawaharlal Nehru:
The longest-serving Prime Minister, Chacha Nehru (as he is fondly remembered) was a central figure in the Indian politics, both before and after independence. Born on 14 November 1889, his significant focus was to enhance the country’s industrial sector for which he started the ‘five-year plan in 1951′.

Besides his famous non-aligned policies in foreign affairs, his other key achievements are: 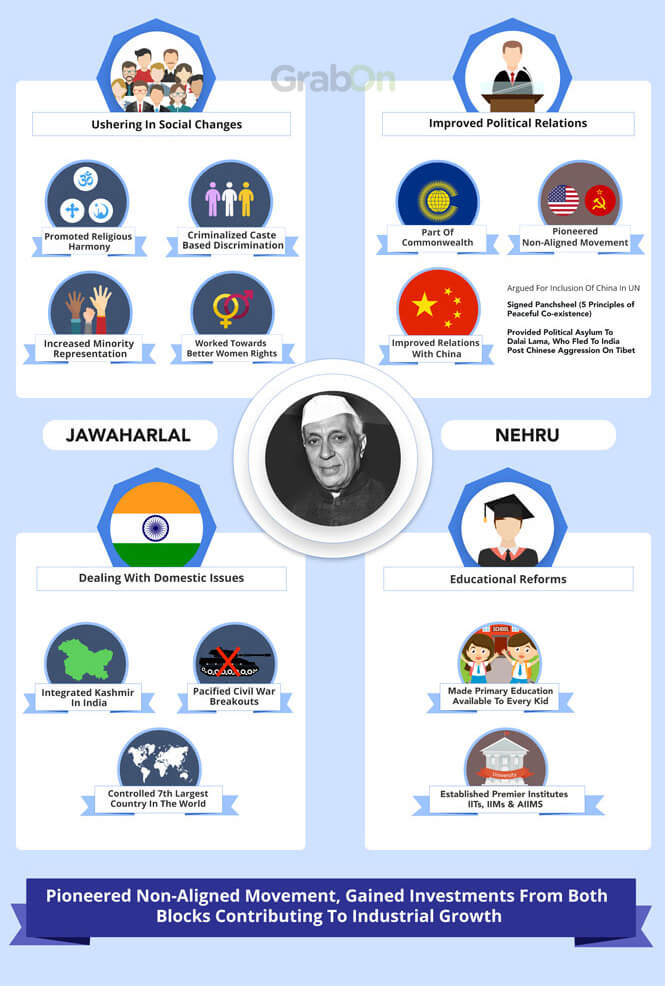 The list can go on. Considering he was India’s first Prime Minister and served for 17 years, it is hardly a surprise.

So, that’s the country’s history. How well do you know the leaders who shaped our country?

We wish you a Happy Independence Day this 2021 and hope you actively show interest in the country’s policies. How will this country prosper if the citizens are not active and show an educated opinion when it comes to the country’s welfare!